OSCE PA: Human trafficking of Migrant Children Triples Over the Past 15 years

Hedy Fry (Canada) underlined the importance of OSCE parliamentarians participating in a variety of international for a in order to raise the profile of the OSCE’s migration-related work.

Taking stock of migratory developments in the OSCE region over the last several months, the OSCE Parliamentary Assembly’s Ad Hoc Committee on Migration met today and discussed how the COVID-19 pandemic has exacerbated the precarious conditions in which refugees and asylum seekers find themselves. The meeting also focused on developing synergies between the OSCE’s executive structures and OSCE parliamentarians in the area of combating trafficking in human beings along migration routes.

Committee Chair Margareta Cederfelt (Sweden) emphasized the particularly negative impact that the pandemic has had on refugees and migrants, including how it has been used in some cases as a pretext to suspend refugee resettlement programs, and how quarantine measures imposed on overcrowded migrant camps, combined with frustration over squalid living conditions, have led to humanitarian crises.

“As countries imposed travel bans and adopted a range of other measures to contain the pandemic, already scarce safe and legal pathways were further reduced,” Cederfelt said. “Combined with an economic downturn disproportionately impacting migrant communities, the COVID-19 pandemic has provided fertile ground for smuggling and cross-border trafficking networks to flourish as they seek ways to overcome these new barriers.”

The meeting was joined by OSCE PA President Peter Lord Bowness (United Kingdom) and Secretary General Roberto Montella, who expressed support for the work of the committee. OSCE Special Representative and Co-ordinator for Combating Trafficking in Human Beings Valiant Richey spoke to the committee about his work in the area of addressing human trafficking along migration routes with a particular focus on children, and highlighted areas in which parliamentarians could make a contribution.

“The number of child victims of trafficking tripled over the last 15 years,” Richey said. “Tens of thousands of children are being trafficked every year across borders, and we are not getting a grip on it. We urgently need to improve communication between countries of origin, transit and destination. Instruments are there, but they need to be adopted and implemented.”

Richey noted that trafficked persons are often classified and treated as irregular migrants, even when clear indications of trafficking exist, and they are therefore at constant risk of detention and deportation. “We need to do a much better job at identifying and protecting victims of trafficking,” he said, urging parliamentarians to enhance national legal frameworks in this regard.

With eight members of the committee members participating, the discussion focused on concrete ways for OSCE parliamentarians to counter trafficking in human beings through targeted legislation and improving the conditions that lead to trafficking, including by alleviating poverty.

Kyriakos Hadjiyianni (Cyprus) drew upon the experience of his country which has adopted legislation to criminalize the use of services offered by victims of human trafficking. “We, as parliamentarians, must ensure that there are legislative frameworks in place to protect victims and prevent future human trafficking,” he noted.

Members also suggested thinking out of the box and using modern technologies to fight human trafficking.

Gudrun Kugler (Austria), for example, discussed work that she is doing in the Austrian parliament on human trafficking and suggested helping to protect victims by amplifying their stories, including by working with platforms such as Netflix to produce documentaries on the topic. Hedy Fry (Canada) underlined the importance of OSCE parliamentarians participating in a variety of international for a in order to raise the profile of the OSCE’s migration-related work.

Participants also discussed the humanitarian situation in Greece’s Aegean Islands, especially on Lesbos, as well as ways to promote a humane and durable solution to the crisis in northwestern Bosnia and Herzegovina.

Members highlighted the pushbacks and other violations of human rights that are occurring not only at the external borders of the EU, but also within the EU. The EU Pact on Migration and Asylum calls for the establishment of independent human rights monitoring mechanisms, it was noted, but instead many of those who have been accused of committing violations are also tasked with monitoring.

The committee also discussed the possibility of organizing a parliamentary web dialogue in March, as well as possible upcoming field visits.

The OSCE PA Ad Hoc Committee on Migration was established in 2016 and consists of 17 Members of Parliament from 15 OSCE participating States.

For more on the work of the committee, please click here. 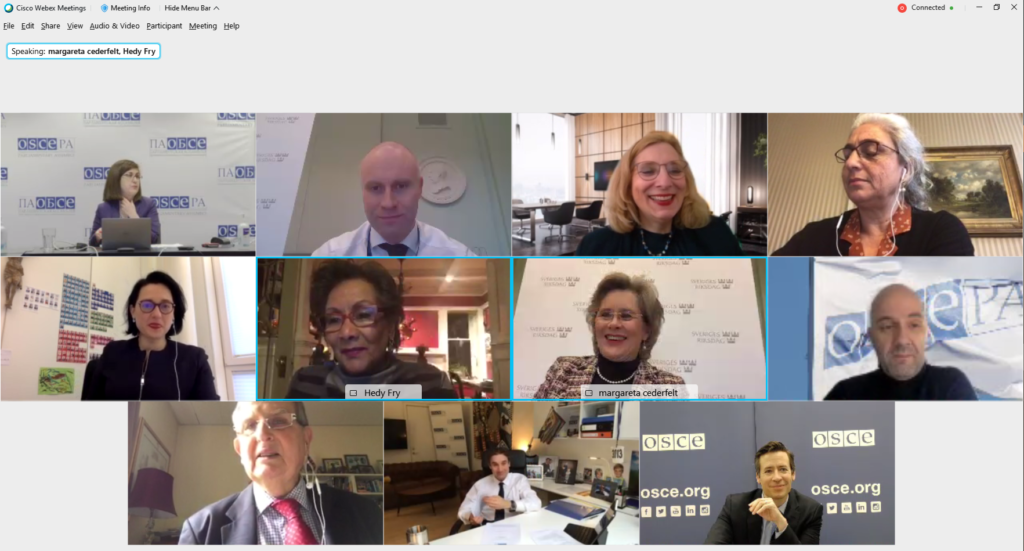