With the world’s longest coastline and connected to three oceans, Canada is well positioned to be global leader in the blue economy – an economy that creates good, middle-class jobs, while ensuring healthy oceans and sustainable ocean industries.

Building a blue economy that benefits Canadians from coast to coast to coast requires input from people in coastal communities and across the country. That’s why today, the Minister of Fisheries, Oceans and the Canadian Coast Guard, the Honourable Bernadette Jordan, officially launched the engagement phase in the development of Canada’s Blue Economy Strategy. Whether it is through new products and technologies to enhance sustainability in the commercial fishing industry, exploring offshore renewable energy to transition to net-zero emissions, encouraging sustainable tourism in coastal regions, enhancing international trade, or developing new green technologies and practices in ocean-related fields, all Canadians have a vested interest in determining how to grow our ocean sectors responsibly and sustainably.

To kick off the engagement, the Minister will host a series of virtual roundtables with ocean innovators, academia, women and global leaders, and the fishing and aquaculture industries. Fisheries and Oceans Canada (DFO) is also launching a Blue Economy Strategy website today, where Canadians will be invited to provide their views and input. Engagement will continue until June 15, 2021, and the feedback received will inform the development of this whole-of-government strategy, which will be released in late fall. Canada’s Blue Economy Strategy is expected to contribute to sustainable oceans, drive investment in our ocean industries, and create jobs in coastal communities as Canada charts its economic recovery from COVID-19.

Over seven million people live on Canada’s coasts and our ocean industries contribute approximately $31.7 billion to Canada’s GDP every year. With vast ocean spaces, and extensive oceans research capacity, we are in an enviable position to harness even more ocean growth potential in the years to come – and the consultations launched today are the first step in this important process. 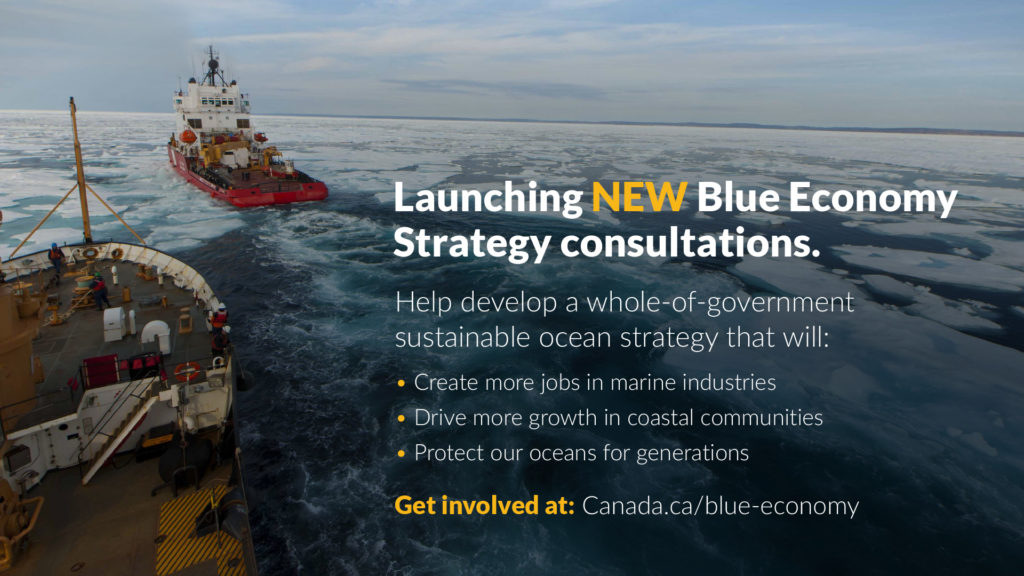 “Canada’s blue economy should be second to none. That’s why we’re developing a strategy to make our ocean industries more sustainable, more productive and more prosperous. This is about creating more long-term opportunities for our coastal communities, by working with the ocean on its terms. Canadians understand that action on climate change is vital to sustainability and economic growth, and building a thriving, sustainable ocean economy is no different. The Blue Economy Strategy will help steer federal investments and actions, on all three coasts, across all ocean sectors, toward a single goal: to get more Canadians working on and in the water.”

The Honourable Bernadette Jordan, Minister of Fisheries, Oceans and the Canadian Coast Guard

“A Blue Economy Strategy means long-term prosperity for coastal and Indigenous communities. A comprehensive strategy will reflect the input of all Canadians, further protect our ocean-based resources while increasing our competitiveness.”

“Our government understands that Canadians have always had a strong connection with our coasts and waterways. The Blue Economy Strategy aligns and complements what is being accomplished through Canada’s Oceans Protection Plan. Together, with Indigenous communities and stakeholders, we’re investing in protecting the environment while growing the economy by working to create a world-leading marine safety system that improves responsible shipping, protects Canada’s waters and strengthens response measures.”

“The oceans are a vital lifeline for Indigenous peoples in Canada’s North and Arctic, for everything from hunting, to fishing, to the delivery of goods through Sealift. It is essential that the unique needs of First Nations, Inuit, and Métis communities in the North are reflected in Canada’s Blue Economy Strategy. This will help drive future activities that protect these waters while enhancing economic opportunities. That is why we need partners from across Canada to engage in the development of this important strategy.”

“If Canada is going to remain a leader in the blue economy, we need to continue to develop new technologies and solutions that allow us to increase productivity in our ocean sectors while enhancing their protection to ensure sustainability. Our world leading ocean-innovators will play a vital role in the future of our ocean sectors.”

The Honourable François-Philippe Champagne, Minister of Innovation, Science and Industry

“Our ocean economy will only continue to grow, and by having a comprehensive Blue Economy Strategy, we can ensure that our actions and investments are coordinated to ensure proper stewardship of Canada’s blue resources. This will in turn lead to long-term economic prosperity for those who depend on our ocean sectors, including tourism businesses in coastal communities.” 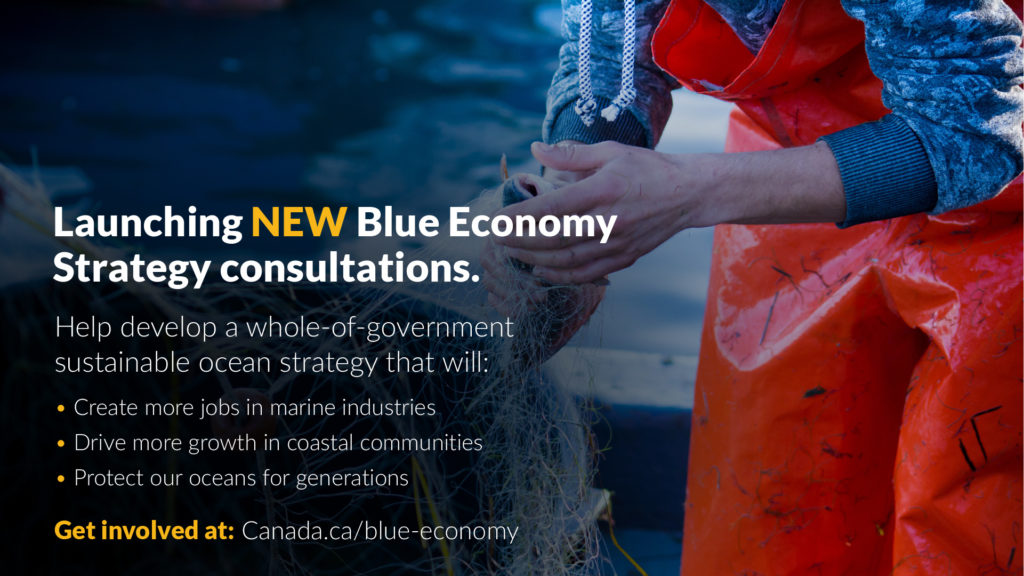